And if either Vanyel or Yfandes falters, both Valdemar and its Herald-Mage must pay the ultimate price. Tarma witnessed her clan's murder and, swearing vengeance, became a master warrior. Kethry fled her forced "marriage" and became an adept--pledging her power to the greatest good.

When Kethry obtains a magical sword which draws her to others in need, the two vow to avenge the wrongs done to womanhood. Evil had cast its shadow over the kingdom of Rethwellan.

When Idra, leader of the Sunhawks mercenaries, failed to return from a journey to her home, Tarma and Kethry, warrior and mage, set out in search of their vanished leader. This exciting new anthology includes a new novella featuring Mercedes Lackey's most popular heroines, Tarma one of the sword-sworn and most feared of all warriors and Kethry who wields magic and weapons for the greater good , whose fates are suddenly bound together in blood by the powers that control their destinies.

Also included in the unique volume is the complete collection of Lackey's short stories about these two brave sisters as they answer the call of their destinies with sword and sorcery! 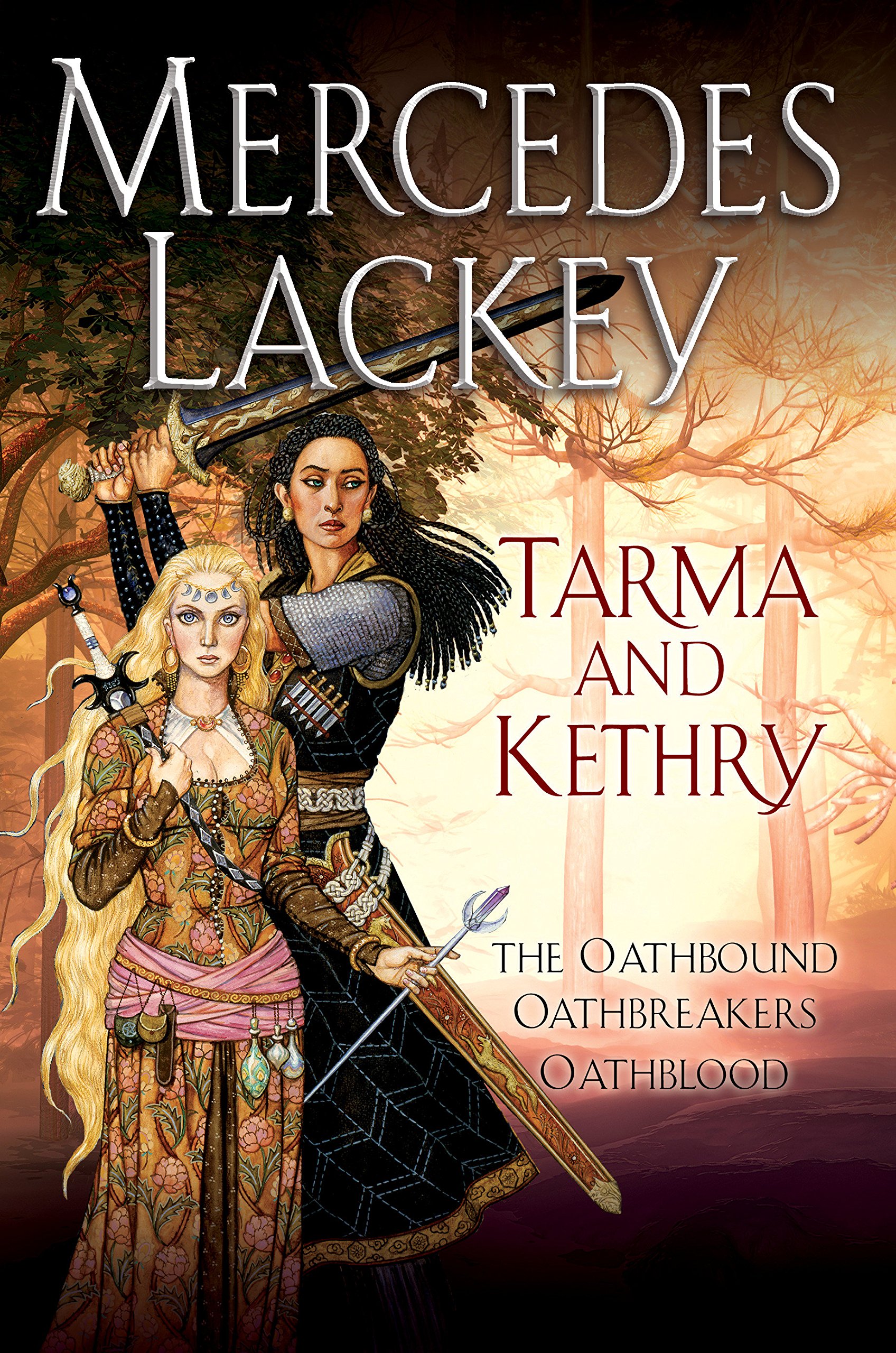 It is an age when Valdemar is yet unfounded, its organization of Heralds yet unformed, and magic is still a wild and uncontrolled force. Skandranon Rashkae is perhaps the finest specimen of his species, with gleaming ebony feathers, majestic wingspan, keen magesight and sharp intelligence.

Courageous, bold, and crafty, Skan is everything a gryphon should be. He is the fulfillment of everything that the Mage of Silence, the human sorcerer called Urtho, intended to achieve when he created these magical beings to be his champions, the defenders of his realm--a verdant plain long coveted by the evil mage Maar.

Now Maar is once again advancing on Urtho's Keep, this time with a huge force spearheaded by magical constructs of his own--cruel birds of prey ready to perform any evil their creator may demand of them. And when one of Urtho's Seers wakes from a horrifying vision in which she sees a devastating magical weapon being placed in the hands of Maar's common soldiers, Skandranon is sent to spy across enemy lines, cloaked in the protective of Urtho's powerful Spell of Silence.

A central character, Amberdrake, is of a race targeted by the villain. It has been ten years since the magical Cataclysm, which destroyed the twin strongholds of the two world's most powerful Mages, killing Urtho, creator of the gryphons, and sending his forces into exile. Now Urthro's peoples--human and non-human alike live in a terraced city carved into the face of a gleaming white cliff on the edge of the Western Ocean.

Secure at least, Desperate not to lose their hard won home, Skandranon, along with his longtime friend Amberdrake--agree to accompany the envoys back to the Court of the Black Kings, hoping to negotiate an alliance. When a high ranking noble who opposes this alliance is found murdered--Skandranon and Amberdrake realize that they are up against unknown enemies who will stop at nothing, even the use of diabolical Blood Magic, to destroy White Gryphon. A dozen years of peace have passed in the city of White Gryphon - providing well deserved and much needed security for the people who had lost their homes in the magical Cataclysm which killed the Mage Urtho, creator of the gryphons.

But the inhabitants of White Gryphon have not forgotten their long struggles, and have trained an elite guard force, the Silver Gryphons, to protect their city, and if necessary, to join with the army of the Black Kings for mutual defense. National best-selling fantasy author Mercedes Lackey creates a vivid, dynamic fusion of the cultures of ancient Egypt and legendary Atlantis with the most exciting and believable portrayal of dragons ever imagined.

The first book in this thrilling new series introduces us to a young slave who dreams of becoming a jouster-one of the few warriors who can actually ride a flying dragon.

Valdemar anyone? (New book alert) [Archive] - Theoryland of the Wheel of Time Forums

And so, in secret, he begins to raise his own dragon In the second novel in national best-selling legend Mercedes Lackey's richly-conceived new Joust series, the dragonrider Vetch escapes to Alta, the subjugated land of his birth. There, he hopes to teach his people to raise and train dragons-and build an army that will liberate his homeland. In the third novel of the best-selling Dragon Jousters series, The Altan serf Vetch has escaped the enemy kingdom of Tia, only to find his homeland, Alta, enslaved by the evil Priest-Kings. With a small band of followers, Vetch must gather a secret army of dragon riders to rid their world of war and magical domination once and for all.

In the fourth and final novel of Mercedes Lackey's Dragon Jousters series, Kiron, the man who had once been a dragon-boy called Vetch, has united the dragon riders and managed to rid their world of both war and magical domination. But are the evil Magi really gone for good? As Kiron tries to build a new civilization at the site of an abandoned cliff dweller's city, called Aerie, conflicts arise, and he soon realizes there is a vast conspiracy at work, which includes individuals who have infiltrated every walk of life-even his own family.

Once the heads of the Magi, these conspirators are determined to regain their sinister control. Disability Subtags Notes: This is a new feature, so please report any bugs or tag corrections! Unspecified is for where I'm not sure what to tag. Sacred Ground by Mercedes Lackey.

This series provides examples of:


African-inspired empire features heavily. Notes: Checking this feature limits books to only ones that have the selected subtags 'African' is used more than the subdivisions, for difficult-to-pinpoint works and Africa-wide anthologies If your focus is on the subtags, select both the 'race' and 'setting' tags to get all the works with those subtags. I haven't noticed that apparent GLBT agenda extending to her other work, but it is definitely a notable characteristic of Valdemar.

The Valdemar series is the exception, though the books all vary to me in how well they have been written, or the stories, the concept and story in general is worth it. They do tend to be easy and fast reads, though sometimes that is beneficial, if all series were WOT or The way Fo Kings books, I would'nt get much else done. Valdemar series One thing Valdemar has in common with the WOT is the idea of "the essential man" -- the idea that one special person can make a big difference.

To paraphrase a possibly mythical Texas Ranger, "You've only got one disaster, why would you need more than one Herald? I would've added the Last Herald Mage to the list of the bold trilogies being quite relevant. Even though they are more a prequel trilogy that are good for a general understanding of the world. They were actually the first books I read of the Valdemar world. I also enjoyed the Owl Series trilogy of books. I enjoyed the first 2 gryphon books, but could never complete the third for whatever reason.

I never got many of the duologies or stand alone books though. They are good new reads, though I'm finding that with some books, I most likely won't read them again. My mother enjoys reading them though so. The Last Herald Mage trilogy is a reasonable starting point, but I don't think they're 'necessary' to understanding Valdemar. By the time I read them, they were just kind of a recap of the history already gleaned from the main sequence trilogy of trilogies The books I highlighted are the "present day," current events, so to speak.


Almost everything else in the Valdemar universe is prequels that are "good for a general understanding of the world. If I remember correctly the Arrows of the Queen trilogy was published prior to the Last Herald mage trilogy which is why it would seem a recap. I do like that the Last Herald Mage trilogy explains how and why Valdemar got to be the way it is in regards to Heralds.

I think the Intrigues trilogy falls some time after The Last Herald Mage trilogy since before then Heralds were taught by mentors and now they are all taught together in more of a school atmosphere. On a side note I do miss Talia and would love to see more of her and Darin. I think we've had this discussion before somewhere Not precisely a main character, but is "on screen" and prominent in the series most of the time.